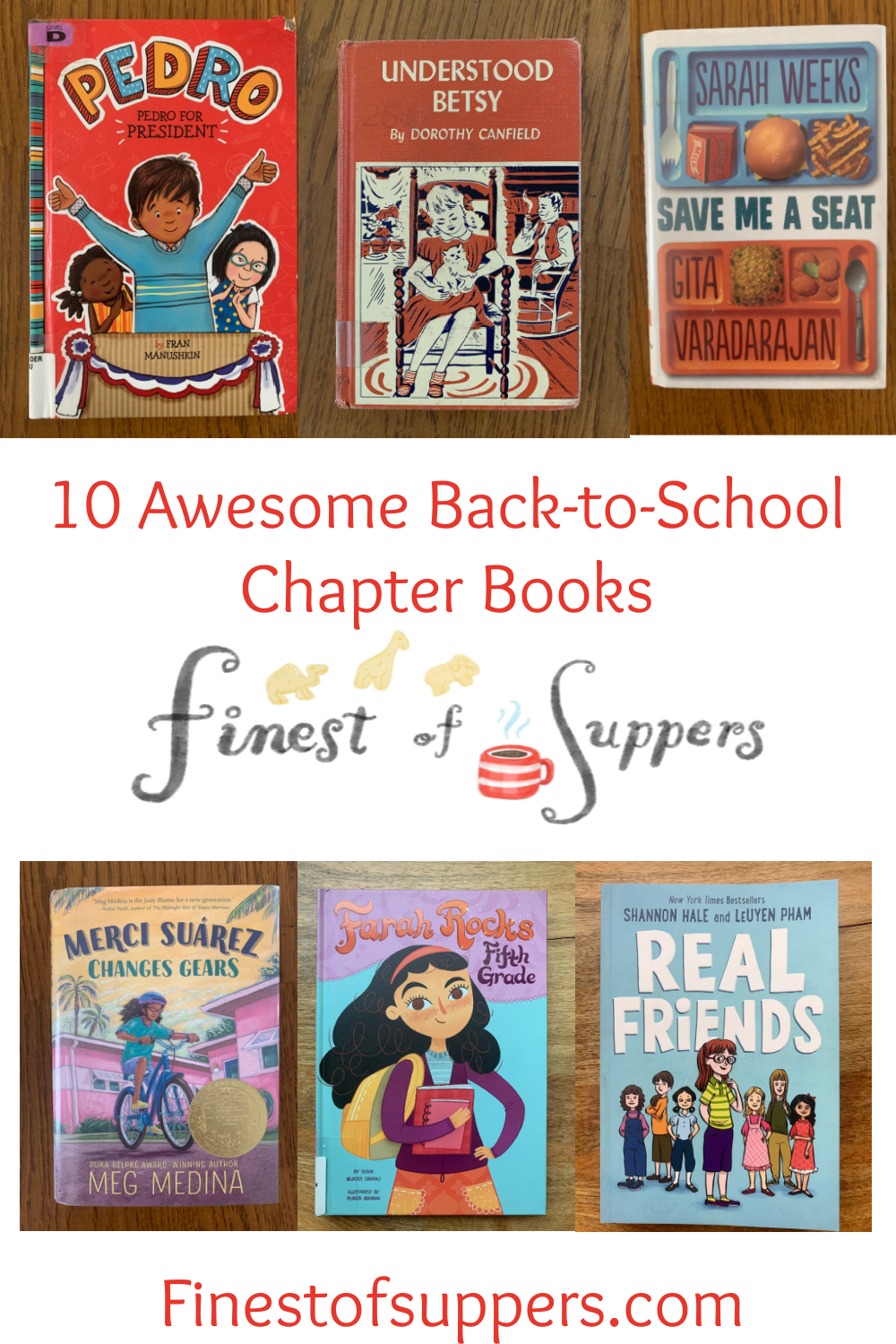 Last week, I featured several picture books that are good for reading around back-to-school time. These were books that are helpful for starting discussions about lots of things younger kids might be anxious or unsure of when starting school. Some common themes in these books were friendship, first-day nerves, separating from parents, and the general routine of a day at school. There are so many wonderful picture books about school, especially aimed at preschool – first graders, but I think books about school can also be helpful for older kids. This especially seems true this year, with many kids returning to physical classrooms for the first time in many months. Beyond just being very enjoyable, the following books can help you start important conversations with older kids about what they might be looking forward to or nervous about as they return to school. There is a wide range of reading difficulty in this list. My only criteria here was to pick books that are good for independent readers (anywhere from second grade up to middle schoolers) and that address real issues kids face in school, whether that be difficult friendship dynamics or pressure to achieve.

Any of the books in the Ramona Quimby series are delightful for reading with or to your elementary aged kids, but I chose this one in particular because it starts on Ramona’s first day of Third Grade at a new school. I first read this book as an 8-year old, and can still remember marveling at how Ramona often seemed to feel the same way I did! Cleary had such a gift for capturing childhood experiences in vivid detail and this makes her books easy for kids to relate to. She was also somehow able to write books that are fun and wildly humorous while still taking the troubles of childhood seriously. Kids will appreciate that Ramona’s school struggles are not treated dismissively in this book, but as serious problems to be worked through.

The Katie Woo and Pedro series of early chapter books by Fran Manushkin are both fantastic and many of them take place at school, such as Katie Woo Loves School and Katie Woo Rules the School. Pedro For President follows Pedro as he and Katie Woo both run for class president. In the process, they learn a lot about teamwork, fairness, and friendship.

In the graphic novel Real Friends, based on her own childhood experiences, Shannon Hale dives deep into the world of elementary age friendship. The book follows Shannon and a group of her friends from Kindergarten through sixth grade as they navigate the sometimes difficult dynamics of friendship. Some of the situations in this book can be a bit intense, so I would recommend it mainly for older elementary aged kids. I think this would be an excellent book to read along with your child and discuss it together. It would be a good book for starting conversations about bullying, anxiety and mental health, and even sibling dynamics.

Farah Rocks Fifth Grade by Susan Muaddi Darraj is the first in a series of books about Farah Hajjar who is smart, resourceful, and kind. In this first book of the series, Farah has a lot to deal with. There is a new student on the bus who bullies her little brother, she is trying to get into the Magnet Academy for middle school, and there is tension in her friendship with her best friend Allie. As I mentioned above with Beverly Cleary’s writing, Darraj also never downplays the importance or intensity of childhood struggles. Each problem that Farah faces is treated seriously and it never feels like the text is talking down to kids about the issues they face. The sequels, Farah Rocks Summer Break, Farah Rocks New Beginnings, and Farah Rocks Florida, follow Farah into sixth grade. These would be most appropriate for upper elementary or early middle school years.

The Unteachables by Gordon Korman was a new book to our family this year and it was a rare read-aloud that our whole family gave a thumbs up! The title refers to a group of eighth grade students at Greenwich Middle School whom everyone has written off as being unteachable (although their official title is “SCS-8”). Their teacher for the year, Mr. Kermit, was once a brilliant teacher but has been worn down and burnt out for years and is assigned the unruly class during his last year of teaching before retirement. The class and teacher form an unexpected bond and The Unteachables finally get a chance to really learn, some of them for the first time. This is not only an inspiring book but also a really humorous, fun read. The kids in SCS-8 get up to all kind of antics, some you will have to read to believe! We read this out loud and it was enjoyed by adults, my elementary aged son, and middle school aged daughter alike but is probably best for middle schoolers if they are reading it to themselves.

The Case of the Snack Snatcher is the first in the West Meadow Detectives series by Liam O’Donnell and features Myron, an autistic third grader and crack detective who is just starting his first day at a new school. When Myron and his teacher find out that the class snacks have been stolen, Myron knows he must investigate. He teams up with his new friend, Hajrah, to find the culprit and get their snacks back! It is wonderful to see a book that celebrates children’s differences as their strength. Myron’s extra-sensitive smelling and hearing, for example, are shown as assets that help him in discovering the thief and make him an excellent detecive. And Hajrah’s extra energy give her an investigative edge. This is a shorter chapter book, great for first to third grade readers but also a fun read aloud!

The cover of this Newberry Medal winning book has a quote comparing Medina’s writing to Judy Blume and that really rang true for me. Like Judy Blume, Medina has created a curious, honest, strong character in Merci Suárez, and her writing never avoids the tough experiences adolescents sometimes face. Merci is in sixth grade at Seaward Pines Academy in Florida where she is trying to be more of a leader and make her family proud while also worrying about her beloved grandfather’s increasingly strange behavior at home. But Merci also has the support of a warm, tight-knit family and caring teachers. This is a good read for Middle School aged kids.

Andrew Clements has written several wonderful school-centered chapter books including Frindle, The Report Card, Lost and Found, Extra Credit, and the Jake Drake series. As with many of Clements’ books, Lunch Money is about a kid who is smart, resourceful, and always trying to get around authority figures without really breaking the rules. In this case, Greg Kenton is a boy who likes to make money, and he’s good at it. He starts by selling candy, then small toys to the other kids at school until his business gets shut down by the principal. But surely no one can object to selling books at school? Greg begins to make his own comic books to sell, but when his neighbor, Maura Shaw, tries to sell comics of her own, Greg must decide how to deal with a competitor. This is a fun, breezy, satisfying read-aloud for any grade and a great read alone book for upper elementary.

The story in Save Me a Seat is told over the course of the first week of school by two fifth graders, Joe and Ravi. Ravi has recently moved to America from India and Joe’s two best friends moved away over the summer. At first they think they have little in common, but soon realize that they are both the chosen targets of their class bully and end up joining forces to teach him a lesson. Joe gains some needed confidence from the experience while Ravi learns, “Winning is not always about shining the brightest. Sometimes it’s about sharing the light with someone who has been waiting in the shadows all along.” Save Me a Seat is a lovely book full of humor and warmth and opens up lots of good avenues for discussion.

I couldn’t resist including one classic favorite of mine on this list. Understood Betsy by Dorothy Canfield was first published in 1916 but I found it to be so relatable as a child and my daughter enjoyed this book too. Betsy has always lived a very orderly life being raised by her Great-Aunt Harriet and Aunt Frances in “a medium-sized city in a medium-sized State in the middle of the country.” While Betsy’s Aunts are have very kind hearts, their lives are very quiet and sheltered. When Aunt Harriet becomes ill, Betsy must go to live with the Putney cousins on their farm in Vermont. This move is very scary at first, but ends up being a life-changing experience for Betsy as she experiences independence for the first time. My favorite parts of this book take place in the little one-room school house near the farm in Vermont and Betsy’s experience with changing from a large city school to a tiny one in the country. This is quite a long book but makes a great read aloud or read alone book for an older elementary child.