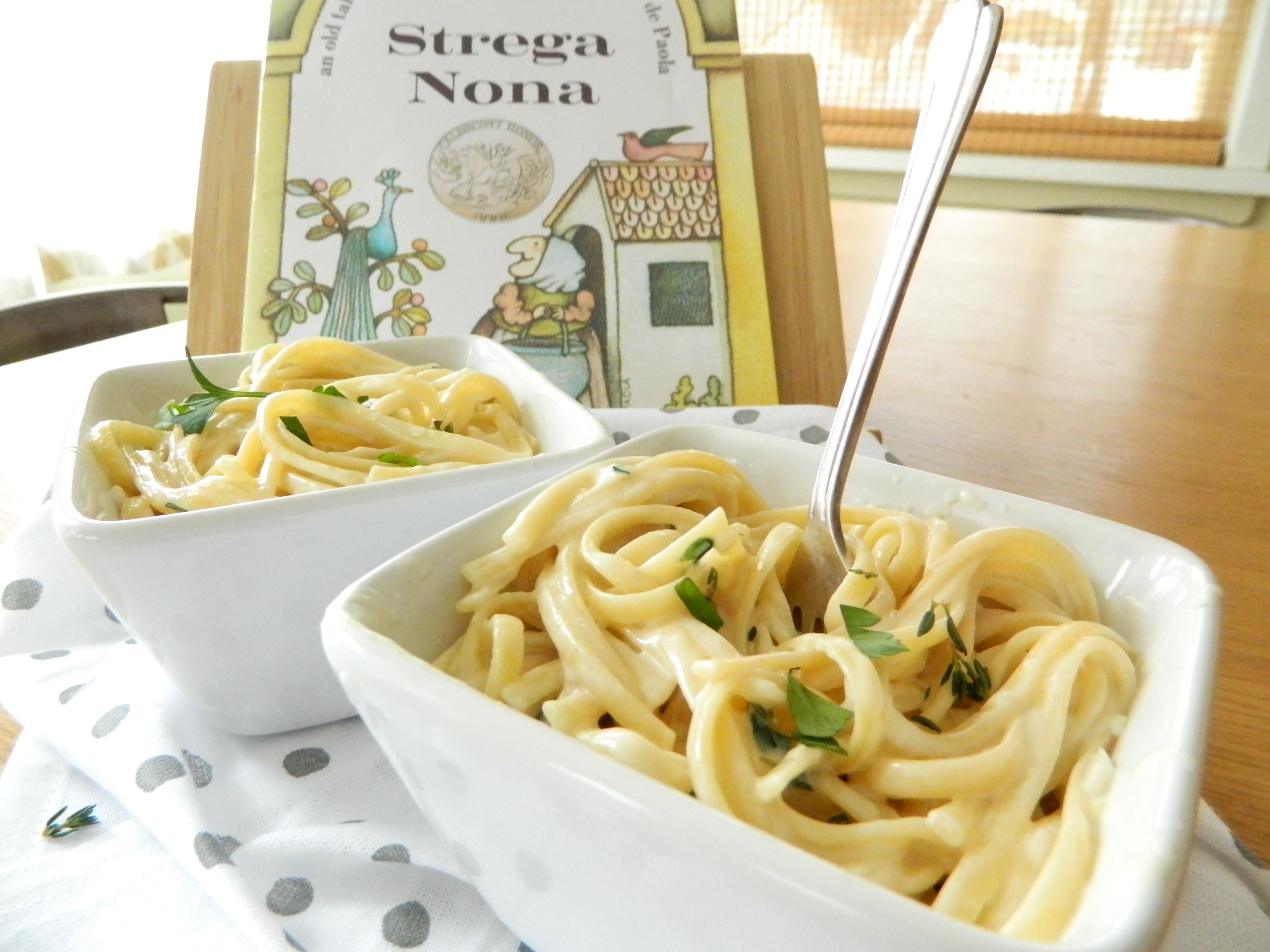 Unlike the poem featured in my first post, the book I’m talking about today is not one I remember from my childhood. Although I may have read Strega Nona by Tomie dePaola a few times in school, it’s a book that I’ve mostly come to love from reading it to my own kids. I love this whole series of books about a magical “witch Grandmother” in Italy, but the first book in the series is still my favorite as it tells the story of Strega Nona’s magical pasta pot. With just a few special words, she can make the pot cook as much pasta as she needs for each day. When her bumbling helper, Big Anthony, thinks he can use the magic to his advantage, he’s in for a big surprise!

Coming up with a recipe for Strega Nona noodles was a challenge. Somehow, when I imagined the pasta pouring from Strega Nona’s magical pot, I always thought it would taste rich and cheesy. Maybe it’s because the pasta is white in the book, or maybe it’s my kids’ love of simple noodles and cheese, but I think the magical noodles would taste something like extra-delicious buttered noodles with parmesan. Also, there has to be some “magical” element to a recipe that attempts to imitate Strega Nona’s pasta. In other words, I was trying to come up with a recipe for magical, cheesy noodles.

I’ve been a bit skeptical of the “one-pot” noodle craze, wondering if cooking noodles in the sauce really worked. I was afraid they would end up gummy or undercooked, but I decided to give one-pot pasta a try for the sake of “magical” noodles. And, to my surprise, it really worked! Cooking the noodles in a combination of milk, cream and chicken broth yielded pasta that was creamy, tender and perfectly saucy. In other words, just what I imagined Strega Nona’s would be like!  Just stir in some grated parmesan at the end, along with some (optional) fresh herbs, and you have delicious, cheesy noodles in the same time it takes to cook a box of mac and cheese.

The one-pot trick really impressed the kids, too. For optimal excitement, I suggest letting the kids watch you add the noodles to the pot, then reading Strega Nona while they cook. By the time you’ve read the book, you’ll have your own Magical  One-Pot Cheesy Pasta waiting for you! 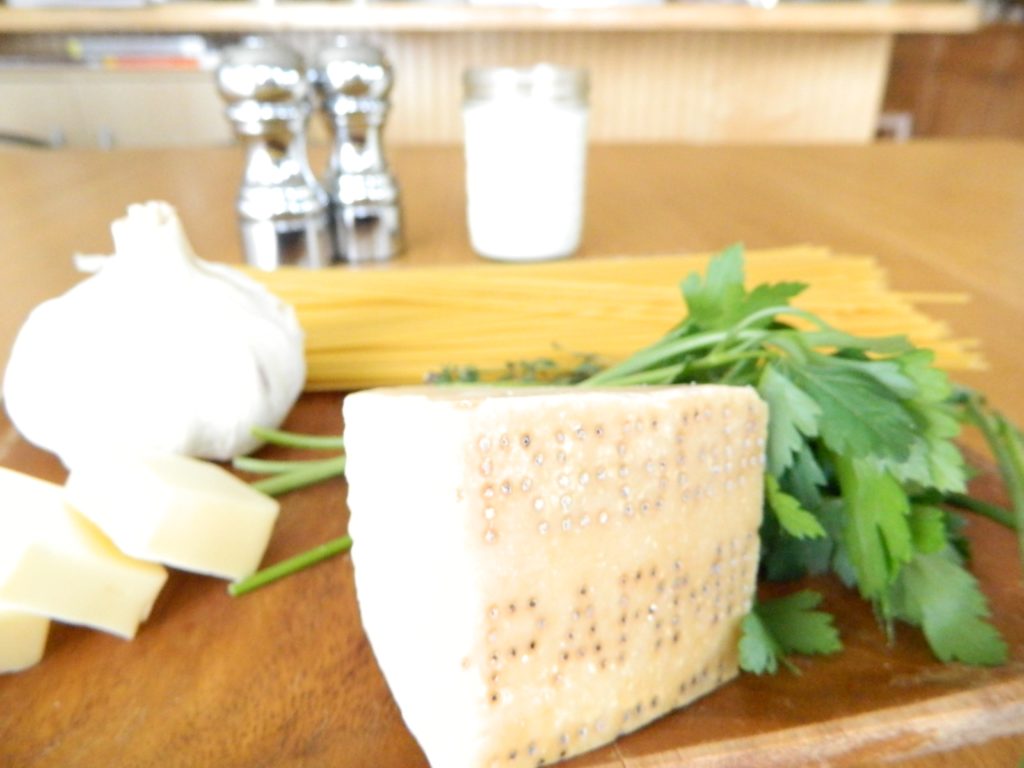 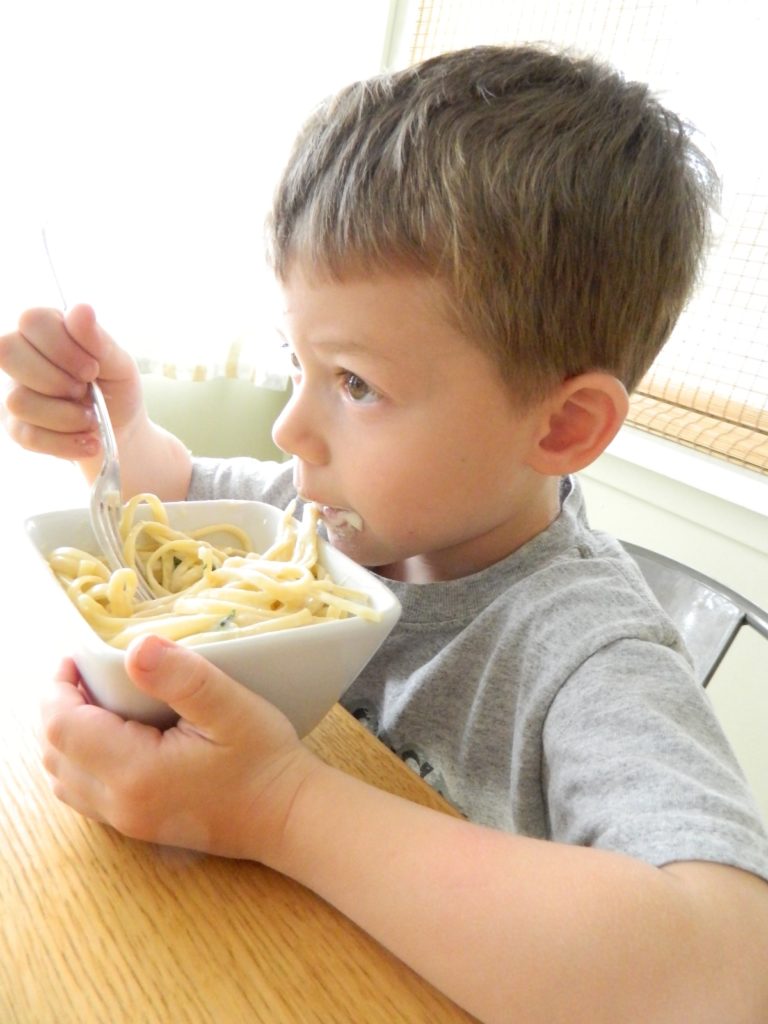 8 ounces linguine or other long pasta

Kosher salt to taste (if needed)

Animal Crackers and Cocoa to Drink